The Customs Administration of Xinjiang, the Chinese region across the border, and Kazakhstan’s Agriculture Ministry met on September 8 to discuss opening quality-control labs at border posts to speed passage of food products, reported Kazakh media, including frozen beef.

The Kazakhs smell an opening. Beijing this year has been squeezing out a longstanding favorite source of beef: Down Under. In May and August the PRC introduced import restrictions on beef from Australia, controls that followed Canberra’s criticism of Beijing’s human rights record and handling of the coronavirus.

But Chinese who are rich enough to enjoy imported meat are notoriously picky, and Kazakhstan does not have a developed nation’s brand appeal or phytosanitary bona fides. Will Chinese connoisseurs enjoy Kazakh cows and pigs?

Investors think so. Sizing up China’s taste for pork – not a native delicacy in Muslim-majority Central Asia – Danish and Chinese investors are backing a $22 million pig-breeding complex in Akmola, business news website lsm.kz reported on September 28. According to the government investment office, five meat-processing plants worth $127 million are currently under construction, including a $26 million project in Almaty region backed by Russian and Chinese capital.

The infrastructure to move these goods – mostly part of President Xi Jinping’s trillion-dollar Belt and Road Initiative – is seeing brisk business this year, despite the COVID-driven economic crisis.

On September 20, Lu Dongfu, head of China Railway, revealed that in the first eight months of 2020, the volume of cargo crossing the Chinese-Kazakh border totaled 14.2 million tons, a 30 percent increase over the same period last year, Kapital.kz reported. (Unusually, he only discussed Kazakh data. Kazakhstan releases only aggregate transit figures, not separated by conveyance or origin.)

In addition to the Khorgos dry port, which opened in 2012 and has sped up transshipments over the past three years, Kazakh officials say they wish to modernize an older crossing, Druzhba (previously known as the Dzungarian Gate), to further expand Kazakhstan’s capacity as a major transit hub. The number of Europe-bound Chinese trains crossing into Kazakhstan at the two checkpoints grew 480 percent between 2016 and 2019. 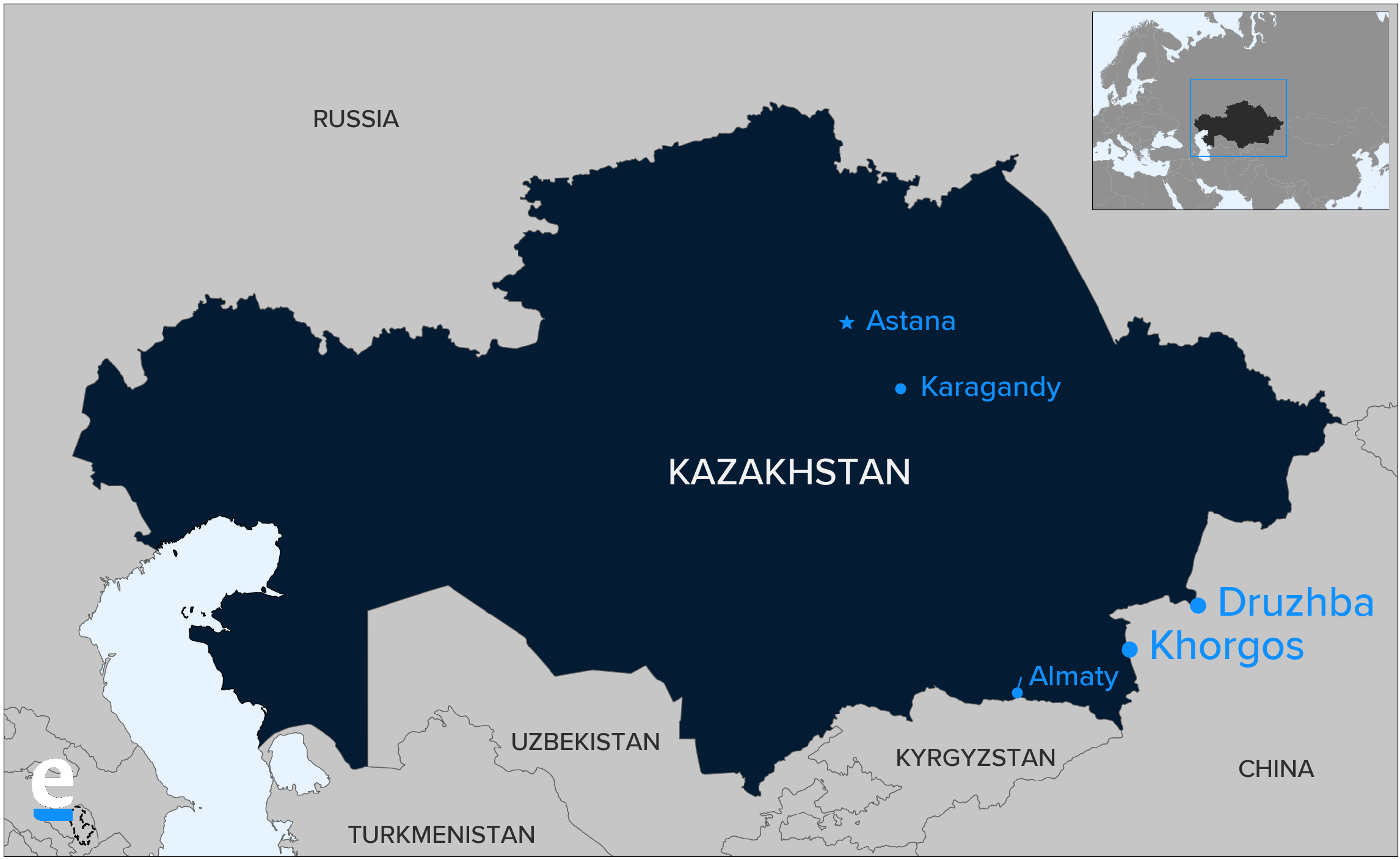 Isolationist Turkmenistan is making itself an unlikely poster child for Kazakhstan’s efforts. On September 9, the second cargo train rolled in from China via Kazakhstan; the first had arrived in May. What the four-dozen 40-foot containers carried is unknown. But if this becomes a regular route, Turkmenistan might have a new market for the sub-par consumer goods it peddles domestically.

Or, more likely, Beijing is ogling a direct route to Iran. Since 2014 a railroad has crossed Turkmenistan linking Kazakhstan and Iran, though Ashgabat is prickly about trading with neighbors. It has blocked Iranian trucks almost all year, citing COVID-19. In 2018 it had a beef with Tajikistan, stopping its trucks from crossing without explanation.

The PRC has dramatically scaled back lending to the mountainous country, which has continued borrowing in large amounts from elsewhere, often at higher interest rates. Any investor in Tajikistan should question the security of their ventures given that President Emomali Rahmon, who has been in office for 28 years, is seeking yet another seven-year term in an October 11 poll.

Beijing clearly worries about Tajikistan’s stability, yet it continues to pretend it can keep its military base in the eastern mountains a secret. In mid-September, shortly after a Pentagon study discussed the base, the Chinese Embassy dismissed media reports about the base as “completely unfounded and groundless speculation.” Instead, China’s security cooperation with Tajikistan is “based on the principles of transparency, openness, and mutual benefit.”

Tajikistan was not on the itinerary while Foreign Minister Wang Yi swooped through the region on September 12 and 13, meeting the presidents of Kazakhstan and Kyrgyzstan to talk the pandemic and global politics. No new business deals were disclosed, but Wang did extract pledges the two countries would stay quiet while international pressure mounts over its Muslim labor camps.

While Wang was in Bishkek, Kyrgyz officials raised the delicate matter of debt relief – the second time they asked in a month – though the official Chinese readout of the visit ignored the appeal. Beijing holds around $1.8 billion or over 40 percent of Kyrgyzstan’s external debt.

While Beijing quietly ponders that request, it is eager to keep working. Over 100 Chinese workers returned to Tajikistan on a September 10 charter flight for the first time since the pandemic began, among them 57 employed by state-owned Power China and 54 employed by other Chinese companies based in Tajikistan. Many are specialists on a $170 million project to update the 240MW Golovnaya hydropower plant in southern Khatlon region, overseeing repairs being financed by the Asian Development Bank.

Rahmon, during a September 25 visit to Golovnaya, praised Power China as world-class, the company reported. He also asked workers to “speed up” their efforts and “put all units into operation as soon as possible.” Rahmon is a man in a hurry. Water levels at the main Nurek hydropower dam were lower than average this summer after another winter of reduced snowfall. With untold thousands of migrant laborers grounded thanks to COVID-19, it could be a dark, cold winter ahead in Central Asia’s poorest country.