The COVID-19 crisis has been the great accelerator in many areas.

This unprecedented crisis has also exposed Citigroup’s (C) strategic vulnerabilities inherent in its business model. Putting it simply, running an emerging-markets global consumer bank under the umbrella of a globally-systemic bank in hindsight is completely sub-optimal (if not insane!).

Selling the Asian and Mexico consumer franchises is extremely accretive for shareholders, and in this article, I will explain why.

Citi will probably do just fine once the economy normalises and will likely trade above tangible book once again, so I would certainly buy the stock at current valuations. Nonetheless, a strategic rethink can unlock massive shareholder value and turbo-charge returns. This is the opportunity presenting itself to Citi’s new management team and one that investors should pay close attention to.

Citi’s CEO strategy was aimed at delivering a mid-teens return on tangible equity (RoTCE). It expected to generate ~20% RoTCE in its consumer bank and close to mid-teens in the Institutional Client Group (ICG).

From a regulatory capital management perspective, the strategy also appeared sensible. The two distinct businesses are complementary whereby ICG assets consume very little capital, but are extremely leverage hungry (think about notional swaps/derivatives as an example). Whereas the Consumer Bank is a mirror image – it is a high RWA density business and thus consumes a high capital charge, but at the same time, it is extremely leverage light.

Citi also sought to return increased amount of capital to shareholders primarily in the form of buybacks. Citi’s obsessive focus on managing the CCAR bore fruits, and it successfully managed to deliver increased capital returns over the last four years.

On the cost side, Citi appeared to also deliver by keeping costs broadly flat. However, as we recently found out, Citi also seemed to have cut some corners by starving the businesses of key technology investments. This has reportedly cost Mr. Corbat his early exit. 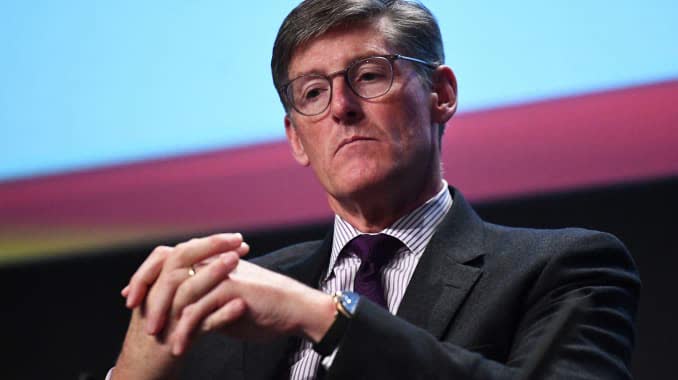 Even prior to COVID-19, Citi struggled to fully meet its targets. The culprit was heightened competition in the Credit Cards space and therefore Citi failed to deliver on the stated objectives for the Global Consumer Bank.

The FY2019 returns slide below speaks to the narrative:

ICG has outperformed delivering close to 15% RoTCE whereby the Global Consumer Bank delivered well-below its stated target of close to 20% RoTCE. Given the intense focus on unsecured credit (Credit Cards), on a risk-adjusted basis, the relative returns are mediocre compared with its peers such as Bank of America (NYSE:BAC) and JPMorgan (NYSE:JPM) that each delivered superior risk-adjusted returns.

There are very few obvious synergies in running a global consumer bank, and these typically are limited to shared technology development costs. The below slide highlights the consumer markets Citi operates in and their relative size: 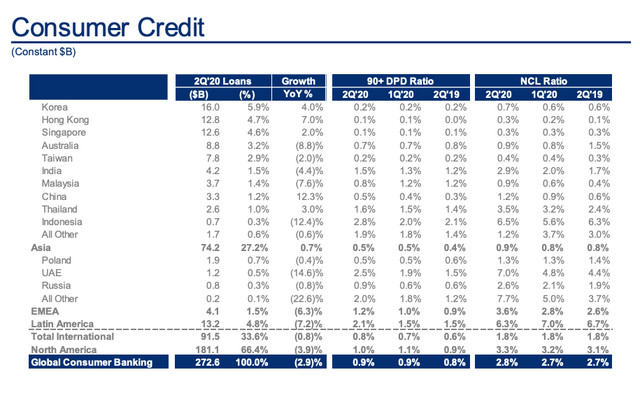 Citi operates in over 20 consumer markets, and in each one, Citi has to maintain full banking license and operations, including legal, compliance, risk, operations, local management, etc. irrespective of its size. Citi would also have a regional and global management oversight team and as a U.S. domiciled bank, it would have to maintain the golden U.S. banking standards globally – suffice to say, this has a significant incremental cost attached to it. The largest market by loan assets is clearly the U.S. with $181 billion of assets followed by Korea ($16 billion) and Mexico ($13 billion) at distant second and third respectively. Many of the other markets are truly sub-scale, and it would be extremely challenging for Citi to make a decent return on capital. Citi does not disclose separately its RoTCE for each geography, but it is a fair assumption that returns are much higher in the U.S., given the sheer scale of the Credit Cards business (proportionately the U.S. business is heavily slanted to the Cards business whereas Asia/Mexico are mirror images of the U.S.).

Citi is clearly a disadvantaged owner of these assets for the following reasons:

1) In most markets, it does not have sufficient scale to generate strong risk-adjusted returns;

2) the market attributes a globally systemically important bank (GSIB) discount to the valuation of its assets;

3) Citi’s capital requirements are much higher compared with, say, regional banks in Asia (that are the natural owners of such assets); and

4) a smaller and less global Citi will likely reduce its GSIB score and capital requirements which immediately increases the RoTCE on the rest of the franchise.

Citi’s global consumer bank assets are very attractive on a stand-alone basis given the strategic focus on affluent segments and their position in growing emerging markets. Especially so, on the premise that these are not owned by a GSIB bank, rather by a scale player in the market (e.g. large regional Asian bank). There will certainly not be a shortage of bidders for both the Asian and Mexican franchises. The synergies in such a transaction are massive for the right bidder. Given low interest rates environment globally, this is a particularly attractive inorganic transaction. The Asian and Mexican banks delivered a combined 2.5 billion of net income in 2019 (Mexico ~$0.9 billion and Asia ~$1.6 billion).

My best estimate is that Citi could conservatively fetch between $35 and $50 billion for such a transaction assuming a moderate economic recovery in 2021. The valuation is premised on substantial synergies generated by a would-be acquirer (especially on the fixed cost side including management, risk, compliance , operations, finance, etc.). Notably, the Mexican franchise by itself was rumoured to be worth ~$40 billion in 2015. Any gains on sale may also be sheltered by Citi’s existing deferred tax assets.

Selling the Asian and Mexican franchise should unlock substantial value. It will make Citi a simpler and smaller bank, materially reduce credit and operational risks and importantly reduce Citi’s capital surcharges. It can then potentially afford to buy back ~50% of its share count, scale up the U.S consumer business physically and digitally and start challenging the likes of Bank of America and JPMorgan. It is a truly transformative strategy that can unlock riches for shareholders. In my view, it makes sense on all fronts.

Citi’s current market value is ~$90 billion and it trades at a mere ~0.6x of tangible book. This is an extremely cheap valuation and exactly the right time to buy the stock. The golden rule with Citi is to buy the shares at 0.6x to 0.9x tangible book and sell at 1.1x to 1.2x book.

The takeaway for investors is to stick to this playbook for now. Should Citi’s new management (or an activist investor) propose a strategic transformation designed to unlock shareholder value – back up the truck.

Disclosure: I am/we are long C, BAC, JPM. I wrote this article myself, and it expresses my own opinions. I am not receiving compensation for it (other than from Seeking Alpha). I have no business relationship with any company whose stock is mentioned in this article.