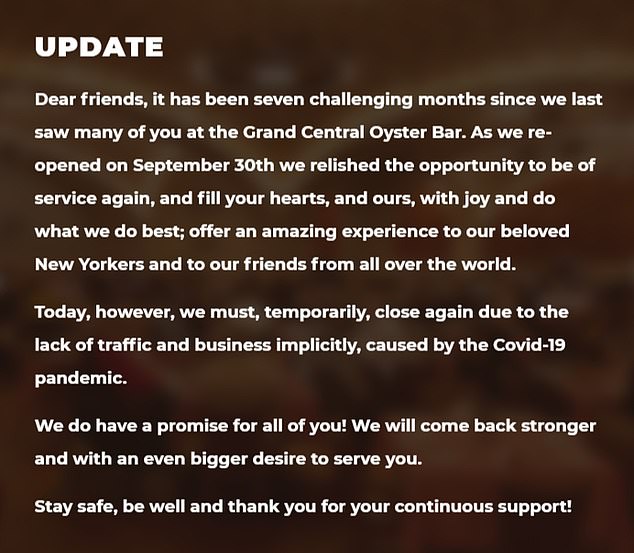 ‘Dear friends, it has been seven challenging months since we last saw many of you at the Grand Central Oyster Bar,’ the statement read.

‘As we re-opened on September 30th we relished the opportunity to be of service again, and fill your hearts, and ours, with joy and do what we do best; offer an amazing experience to our beloved New Yorkers and to our friends from all over the world.

‘Today, however, we must, temporarily, close again due to the lack of traffic and business implicitly, caused by the Covid-19 pandemic.

‘We do have a promise for all of you! We will come back stronger and with an even bigger desire to serve you.’ 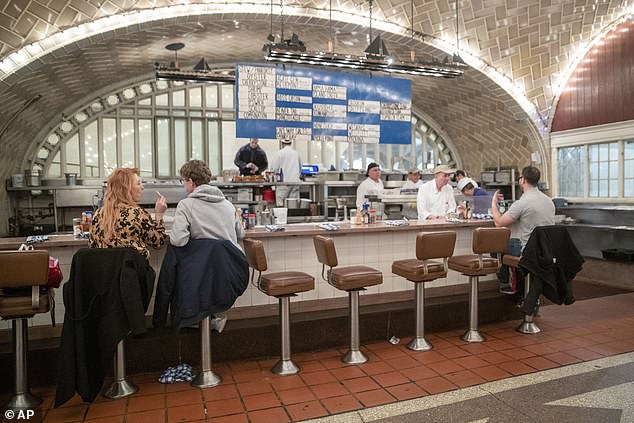 Empty seats are available at Grand Central Terminal’s Oyster Bar (pictured) during lunch time in March 13, just days before non-essential businesses were forced closed due to the pandemic

Grand Central Oyster Bar, a Big Apple staple, was nestled into the bustling terminal for a 107 years before it temporarily closed in March due to the pandemic.

Before business closures, the restaurant enjoyed a steady stream of income from tourists, local office employees and commuters who traversed into the city for work.

But those customers all but disappeared since then.

‘September 30 was our best day and after that it dwindled,’ executive chef Sandy Ingber, an employee of 30 years, told New York Post.

Grand Central Oyster Bar is known for packing eaters at counters inside its expansive restaurant, where it became known for employees shucking oysters in front of customers. 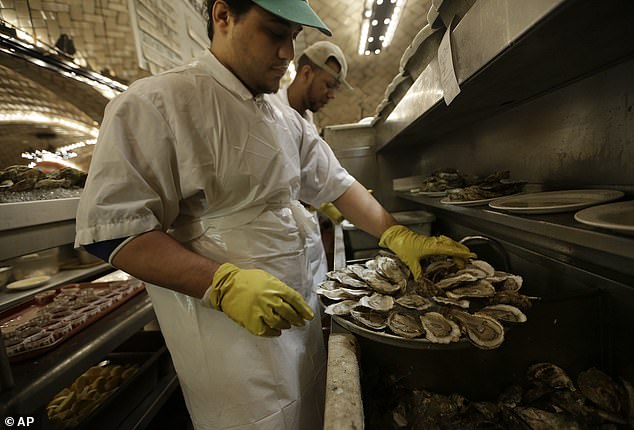 The Post reports that the 440-seat restaurant typically teemed with customers across the main floor and bar areas, but the 25 per cent capacity rule meant only 81 people were allowed inside at a time.

With social distancing in mind, customers were placed five seats apart and the iconic counters were closed off.

Ingber said that after the grand reopening, the numbers began to drop.

‘We were only doing 3 percent of the revenues we ordinarily do at this time,’ he told the Post.

The plight experienced by Grand Central Oyster Bar underscored the uncertainty permeating the city’s restaurant industry as the pandemic stretches into autumn.

In an interview with Market Watch, New York City Comptroller Scott Stringer noted the 90 per cent decline in tourism in the last quarter of fiscal year in 2020.

‘In the midst of the pandemic, we are starting to realize that our 62 million [annual] tourist visitors will be no more in the short term,’ Stringer told Market Watch.

‘We haven’t lost our mojo as a city, but the pandemic has curbed what we can do to attract people from all over the world.’ 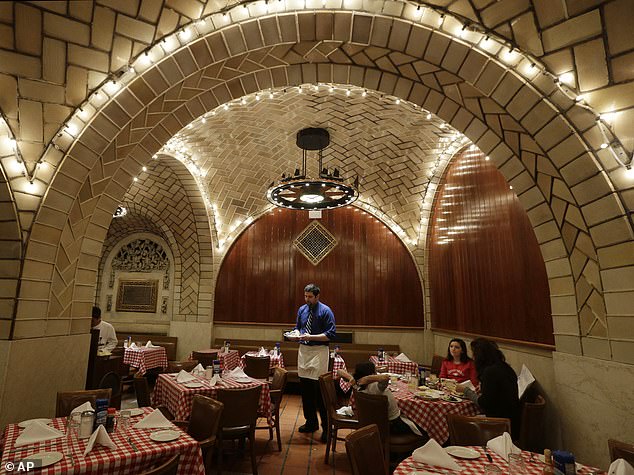 Scott Stringer: ‘We haven’t lost our mojo as a city, but the pandemic has curbed what we can do to attract people from all over the world’ Pictured: customers sit inside the Grand Central Oyster Bar before the pandemic

And the drop in tourism during the pandemic is on course to collide with the changing seasons, which would likely see customers bypass outdoor seating options as temperatures drop.

The problem of customer appeal could assist in shutting down 24,000 restaurants and eliminate 150,000 jobs, according to a report from State Comptroller Thomas DiNapoli on Thursday.

‘Estimates of the potential permanent closures of City restaurants and bars over the next six months to a year have generally ranged from one-third to one-half of all establishments that existed before the pandemic.

‘At the high end, that could result in a permanent loss of nearly 12,000 of the City’s restaurants and bars, and nearly 159,000 industry jobs, although the opening of new restaurants would mitigate some of these losses,’ the report reads.

The 25 percent capacity limit drastically reduced the amount of money restaurants – many of which struggled to turn a profit when packed – could make.

Many have urged Cuomo to allow them to start at 50 percent on October 15 and 75 percent on November and 100 percent by Thanksgiving. 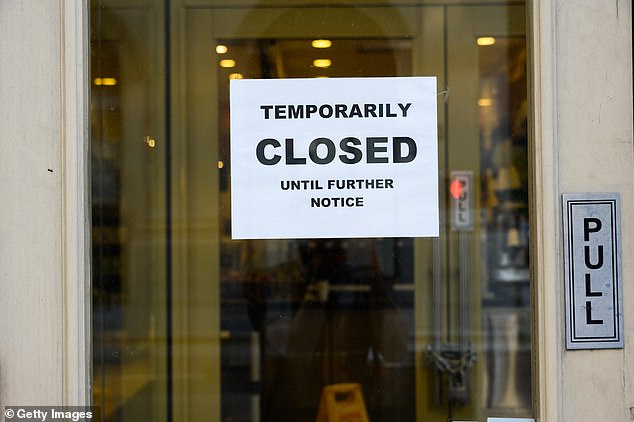 A drop in industry sales could see 24,000 restaurants closed and eliminate 150,000 jobs, according to a state report

Still, Ingber told the Post that restaurant officials have no intentions of shutting down permanently.

Instead, Grand Central Oyster Bar hoped its landlord, the Metropolitan Transportation Authority, would help out with rent.

‘We are awaiting a board meeting by the MTA on Oct. 21 and hopefully they’ll give us some rent forgiveness,’ he said.

The oyster bar’s closure is the latest in a line of New York City shut downs that have unsettled longtime local favorites.

The Roosevelt Hotel on E. 45th St. in Manhattan announced on Sunday that it would permanently close at the end of October due to the pandemic. The hotel was open for nearly 100 years.

The Loeb Boathouse in Central Park fired 175 staffers and temporarily shut down until it had a viable reopening plan. They hope to reopen next April.