While MTB is more of your classical “loans and deposits” type community banks, relative to super regional peers, it does have a strong wealth management presence associated with its Wilmington Trust business. While most other banks focus on growth first, I believe MTB is more focused on sound credit quality above all else. As one can see from the charts below (under “Credit Analysis”), the bank did quite well during the last recession in terms of credit pain.

As one can see from the valuation chart below, the current valuation (in terms of Price to Tangible Book Value) is near 20-year lows. In my mind, there is a large disconnect between share valuation and the overall market. To me, shares are pricing in continued economic pain and a noteworthy deterioration in credit losses. However, based on my analysis below, I just don’t see that happening. In fact, I believe shares are likely to trade materially higher with the positive news of margin expansion. Also, credit looks to be in good shape, rather than the draconian setting the current valuation appears to anticipate.

Because the current valuation is too cheap to ignore, I would go long the shares into earnings. I believe MTB is going to re-rate much faster than peer banks. While I don’t believe MTB is a bank one should hold for multiple years on end, I would be very surprised if it didn’t outpace peer banks over the next 12 months.

While the increase in average earning assets did help the overall dollars generated in net interest income, the confluence of lower-yielding PPP loans and the sizable decrease in interest rates (driven by the Federal Reserve) marketed too much for the possibility of linked quarter growth.

That said, trading and exchange fees were also down a bit more than I would have expected, especially given the market volatility in the quarter. While Bayview Lending Group’s income did create some inconsistency in terms of apples-to-apples revenue comparison, even after backing that out noninterest income was still down linked quarter. 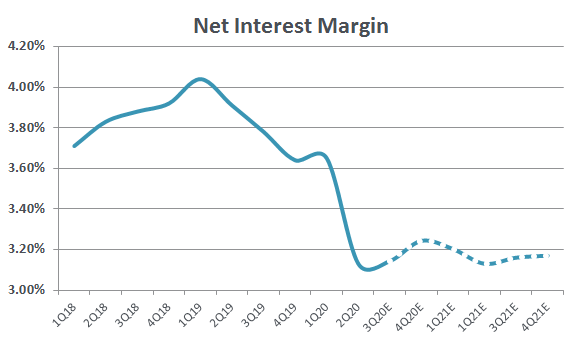 While the margin has experienced a pretty precipitous drop, I believe the bottom has already been reached. While MTB might not see a sizable increase from here, I believe the forming of a floor should be good enough to have shares bounce higher after earnings. Also, when PPP loans do get forgiven, the average earning asset base should be smaller, but more profitable.

In my mind, investors are concerned about the continuation of margin pressure and overall revenue headwinds. While I don’t think total revenue growth is likely until next year, I don’t see material downside in the coming quarters for continued revenue pressure. In my mind, the current valuation is expecting continued revenue pain which I think is unlikely to happen.

When thinking about a bank that has sluggish revenue, or even down revenue, the best-case scenario is that overall expenses follow suit. Most banks have variable compensation that is associated to market performance, whether that is loans generated, accounts opened, or fees associated with service. To me, if the bank is set up properly and aligned with shareholders’ best interest, when the business is down then compensation should also be down.

The second quarter noninterest income was $807 million in the second quarter relative to $906 million from the first quarter. Using the core expenses is the best way to measure success, in my mind. To get the “core” number, investors need to back out some non-reoccurring items like amortization or acquisition expenses. When doing this, the second quarter should actually be considered $803 million (or just $4 million less than the reported number). 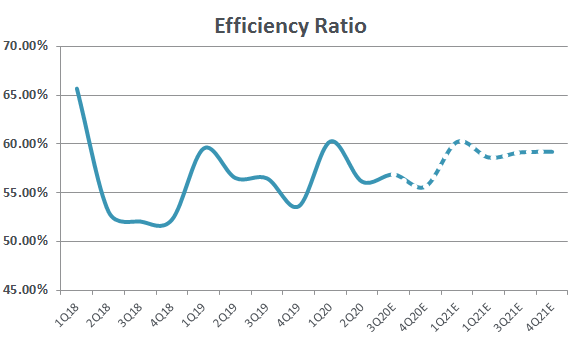 While the bank’s overall expense base continues to work lower, I think investors should keep an eye on the efficiency ratio (which is Expense / Total Revenue). While both expense and revenue don’t have to work together in locked tandem for each quarter, the overall trend (as seen above) is a positive in my mind. While MTB has experienced lower revenue, management has done a good job keeping a lid on expenses. To me, anything above 60% for an expanded period of time warrants a deeper look into the cost basis.

Whenever I think about MTB, I think of the positive credit experience from the last recession. While no bank was completely unscathed from the credit crunch and liquidity freeze in the lending market, MTB did have a remarkably positive net outcome (when compared to bank peers). As one can see from the chart below, MTB posted about half the credit pain that peer banks experienced (~100 basis points of charge-offs at its peak relative to peers at ~200 basis points). 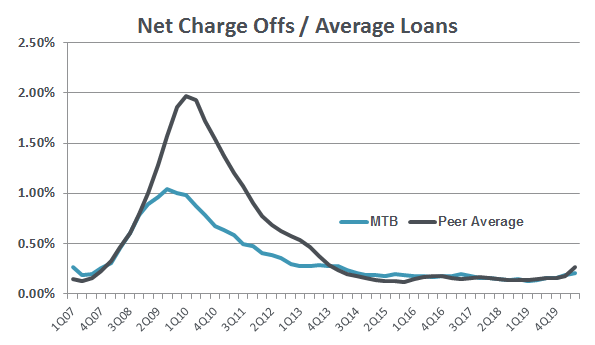 In the second quarter, the provision expense was $325 million, which compares to $250 million seen in the first quarter. According to the press release, this increase was caused by the economic function of CECL and not necessarily the downgrading of credit or increased loss potential from the loan portfolio.

During the second quarter, net charge-offs (NCOs) were $71 million, which amounts to just 0.29% of the loan portfolio. On a comparison basis, the first quarter had $49 million of charges-offs, which made up 0.22% of the portfolio. To get the best comparison, investors should back out the risk-free PPP loans from the balance sheet, and when doing so the second quarter NCOs inches up to 0.31% of total loans. 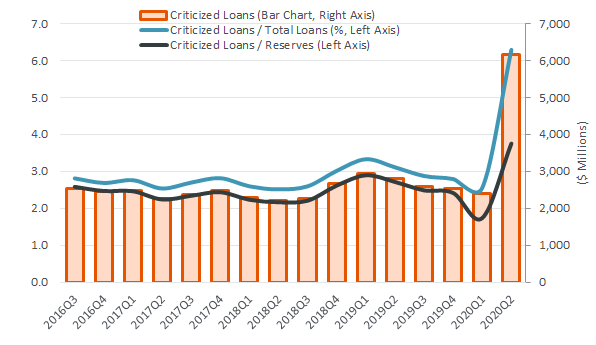 While the chart above indicates that criticized loans might be increasing at a remarkably fast pace, MTB has been rather proactive with its credit downgrades. In the second quarter, nonaccrual loans were 1.18% which compares to just 1.13% in the first quarter. In my mind, while credit might look like it is starting to slip, I believe MTB’s “credit first” culture should provide a solid backstop to the potentially looming credit problems lurking in the lending space.

To wrap up my thoughts on credit, I think that MTB would rather mark the loans negatively at first glance than try to “hide” anything from investors. What gives me confidence in the bank’s credit soundness is the relatively positive experience associated with the last recession. While criticized loans might be increasing, I think it more so has to do with management downgrading (or preparing for) deferred loans to come back on the balance sheet. To sum it up, I feel quite comfortable with the loan portfolio going forward.

From my history of investing, buying something because it is cheap is only half the battle. There typically needs to be a catalyst in order for the shares to work higher. While the banking landscape has had a difficult year, I believe the upcoming third quarter earnings are likely to separate the “haves” from the “have nots.”

In my mind, MTB has a great credit culture and should see limited NCOs going forward. This in and of itself has allowed the bank to trade at a premium to bank peers. However, when compared to itself, it is trading near 20-year lows.

I think the current valuation has to do with the limited line of sight on the future margin. However, based on my modeling, I think the margin not only stops its free-fall, but rather works higher. If this happens to be the case, I would expect shares to drastically outperform peers in the coming months. Bottom line, I would suggest owning shares into the third quarter earnings report.