SGOL has enjoyed a mild rebound in recent days on the back of renewed dollar weakness. However, the rebound has been partly offset by an increase in US real interest rates. 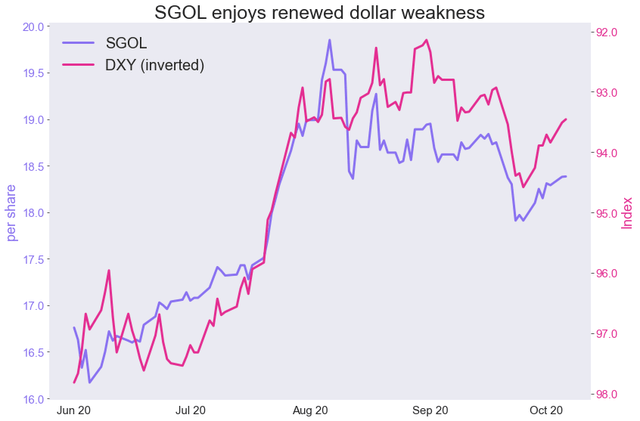 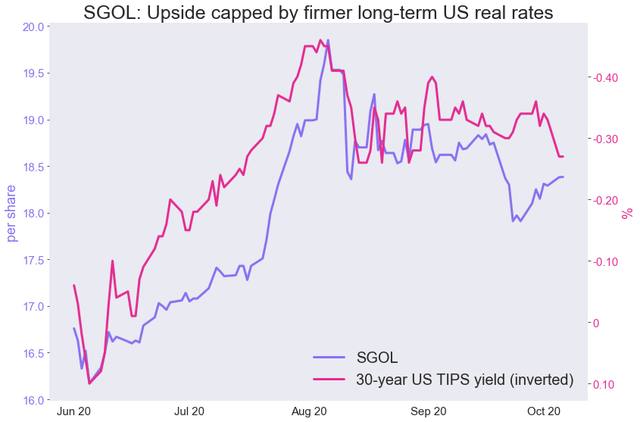 At this juncture, we prefer to stay on the sidelines because the increase in US real rates may continue for longer, triggering some speculative selling in the futures market.

That said, we remain very bullish in the long run because investment demand is expected to grow at a steady pace on the back of inherent macro uncertainty in the years ahead.

With the negative seasonality in gold prices in the near term and the weakening momentum in SGOL over the past two months, we prefer to wait a little longer before turning tactically long again. 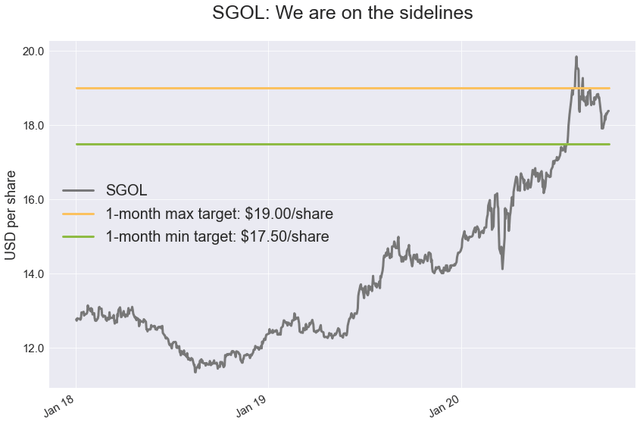 For investors seeking exposure to the fluctuations of gold prices, Aberdeen Standard Physical Gold Shares ETFis, in our view, a great long-term investment vehicle, with a small expense ratio of 0.17%.

The average spread over the past two months is at 0.07%, suggesting that the ETF is also well suited from investors with a short-term horizon.

Further, the legal structure of the Fund prevents trustees from lending the precious metal held in the Fund.

The Fund physically holds gold bars in vaults based in London (UK) and Zurich (Switzerland) custodied by JPMorgan.

Importantly, SGOL, which was launched in September 2009, tracks closely its benchmark – the London PM fix for gold, as the chart below shows. 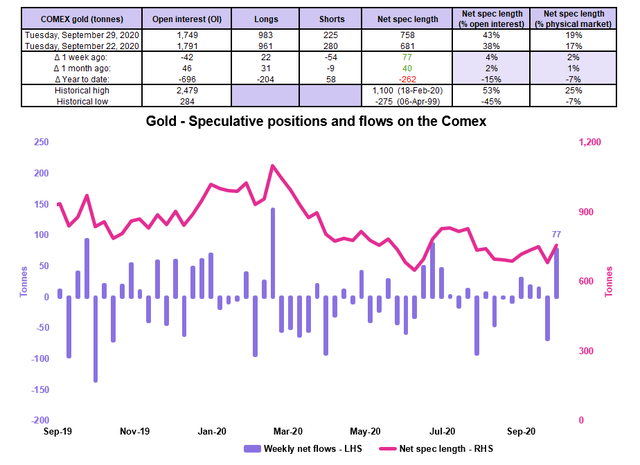 The speculative community increased by the equivalent of 77 tonnes (4% of open interest) its net long position in COMEX gold in the week to October 2, according to the CFTC. This was the largest increase in the net spec length since mid-June.

Despite this, the net spec length in COMEX gold is still down 262 tonnes in the year to date, which corresponds to 15% of open interest (or 7% of the annual supply). The wave of speculative selling was concentrated in the first quarter of the year.

Implications for SGOL: Given the macro uncertainty, we expect speculators to turn more bullish toward COMEX gold in the next 12 months, which should result in an increase in net long positions in COMEX gold, thereby pushing the COMEX gold price and SGOL higher. In the near term, spec sentiment may be undermined by the rise in US real interest rates. 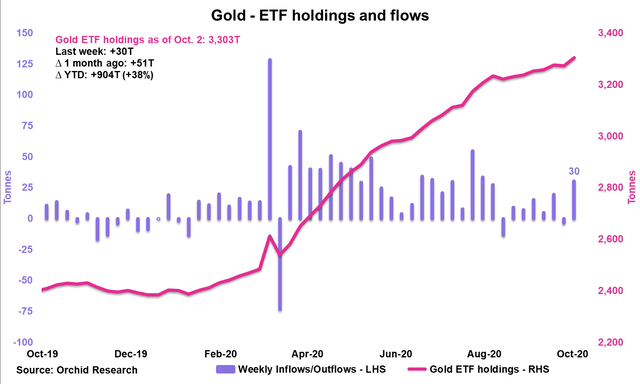 ETF investors boosted their gold holdings by 30 tonnes in the week to October 2, according to our estimates. This marked the largest net inflow since late July.

In contrast with speculators, ETF investors have become strongly bullish on the gold outlook since the year-start. The lack of substantial selling during the liquidity panic in March suggests that ETF investors are long-term investors and do not use leverage to build long ETF positions.

We think that demand for gold will continue to grow in the years ahead due to the inherent macro uncertainty. In the shorter term, there is a major headwind to risk assets in November, which is the possible messy process of the US elections. If the process turns chaotic, a wave of de-risking could emerge, which should concurrently boost safe-haven demand for gold.

According to SFA analysts, gold tends to appreciate leading us to the elections in September before pushing lower until January. This time could be different, especially should US President Trump be reluctant to leave the White House in case of a Biden win.

Implications for SGOL: ETF demand for gold seems to increase at a steady pace, reflecting ETF buying from long-term investors. This is a positive fundamental force for the gold spot price and thus SGOL.

When capturing the seasonal component of the COMEX gold spot price, we find that seasonality is slightly negative in October although it improves from October to late November. The seasonality becomes positive in the second half of December. This would be the ideal timing to turn tactically long SGOL again.

Over a long-term view, we are bullish on SGOL because we think that investment demand for the yellow metal is likely to continue to grow on the back of inherent macro uncertainty.

Over the short term, however, our view is more mixed because SGOL has shown signs of weakening momentum over the past two months, US real rates are rebounding, and the seasonality is not friendly until mid-December.

As a result, we are somewhat inclined to stay on the sidelines, awaiting a clearer signal that a bottom has been reached before jumping back on the long side of SGOL.